Why It’s Special: Hitting .400 in baseball will put you in the same conversation with greats like Ted Williams, and nobody’s holding their breath for it to happen again. Catching a 400-pound yellowfin will put you with equally exclusive company, but in the past decade, it has happened more than you might think. When Mike Livingston broke the world record less than two years prior to Yocum’s catch, it had withstood 33 years of yellowfin fanaticism. Now, less than two years later, the record has fallen once again.

The magical 400-pound-club for West Coast tuna fishermen is an elite one, and Yocum has become the foremost member. Most amazingly, Yocum battled and subdued the beast in only 50 minutes. The hardest-fighting fish pound-for-pound is an endless debate, but a strong case can be made for the yellowfin. Battling a 427-pound tuna must be excruciating. As if the record weren’t enough, Yocum could possibly win $1 million in prizes from Mustad for using a Mustad hook on the catch. The hook company has offered the reward to anglers who break world records for a set number of species. 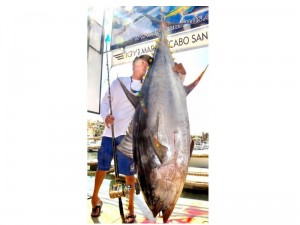