Catfish have been known to take Ivory Soap as bait. 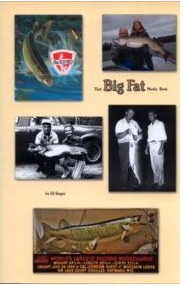 That Big Fat Musky Book is a 50-course feast for the musky lover.

This all new magnum opus decants a heavy brew of intro chapters on gigantism, conditioning, weather, musky dreams, the Great Lakes phenomenon as well as fresh fishy humor and fish references in literature, not to mention the most thorough and at times, surprising study of the world record question with opinions by Joe Bucher, Brad Latviatis, Ty Sennett, Adam Johnson, Jim Saric, Patrick Sheahan, Charles Weiss, Charlie Schauer, Gary Michalsen and others.

Interviews comprise the majority of this book and incluse, in addition to those mentioned above, Patricia Strutz, Russ (Smity) Smith, Frank Pratt, Rodd Umlauf, Pat Wingo, Dallas Helm, Bernie Tworek and many others. Revisted is Dick Sleight with 65 photos.

Appearing also are fascinating newspaper accounts of musky fishing as far back as 1877. This material plus original art, should ease the musky angler’s off-season cravings until he or she can once again resume the chase for the ever enticing gold and emerald queen.