I’m a big fan of the banjo. If you’ve ever seen Deliverance, I bet you can guess my favorite part of the movie. And no, it doesn’t involve squealing like […]

Why it’s Interesting: Nick Anderson gave his father the best Father’s Day present he could ask for, the catfish trip of a lifetime. The Anderson’s are no strangers to big blue cats, routinely catching fish close to 100 pounds. But this fish was one for the ages. Besting the previous world record by more than 13 pounds, this blue cat set the catfishing world on fire. Buggs Island, Virginia is notorious for monster catfish, and has produced previous blue catfish to 109 pounds. 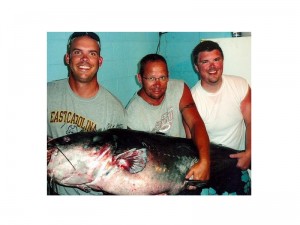