Blue Marlin: The Record That Wasn’t

Why It’s Interesting: When Merriman caught the massive marlin out of Hawaii in 1984, it walloped the current world record by more than 270 pounds, but that’s not the unbelievable part. Merriman, an Atlanta tackle shop owner, was visiting Hawaii as a guest of then Atlanta Falcons owner Rankin Smith who was there for NFL meetings, but it gets even better. The fish made the front page of nine papers around the world at the time it was caught.

The bittersweet end to Merriman’s story is that, because the fish was caught using a line and leader that was longer than IGFA rules allowed for, it was not deemed the “official record.” The marlin, still the second largest every caught on rod and reel in the world, would be “unofficial,” despite Merriman’s amazing catch. A replica resides at Merriman’s Fish Hawk Tackle Shop in Atlanta. To see the specimen in person is the only way to appreciate it. (Fishha 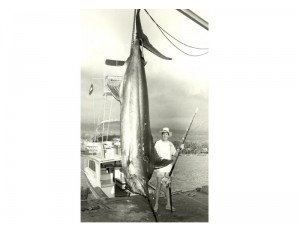