Why it’s Interesting: Walter Maxwell shattered the tiger shark record in 1964, fishing off the coast of South Carolina. At the time, and for 40 years thereafter, the catch was considered one of the great feats in angling and no one thought it would fall. Forty years later, it did. The most amazing things about Clapson’s record are the history behind it and the future for it. Breaking Maxwell’s record was long thought impossible, but breaking Clapson’s might actually be impossible.

Tiger sharks are receiving more protection now around the world than they have in the past century and Clapson might be the last man to legally kill and weigh a record-breaking tiger. Clapson was drifting with an 80-wide when he hooked the beast. 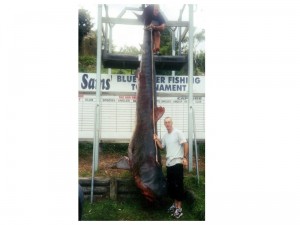