Why it’s Interesting: No matter your favorite species, you never forget your first tarpon. The magic of the fight, the aerial acrobatics and the dread that you’ll do everything right and the magnificent creature will still throw your hook. My first tarpon was just shy of ten pounds; Max Domecq’s was 276 pounds heavier. His first tarpon ever set a world record that has stood for a decade. Lure manufacturer Patrick Sebile was the guide that put Domecq on the enormous fish. It wasn’t a Sebile lure that the tarpon ate, though, but a live a mullet.

The kicker? Rumor has it, Sebile, the guide, didn’t receive a tip. What’s a gotta do? 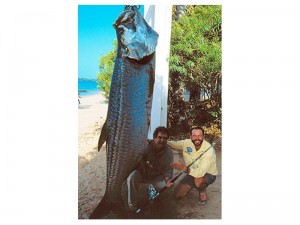