The Perfect Storm: A True Story of Men Against the Sea

The Perfect Storm: A True Story of Men Against the Sea by Sebastian Junger

The Perfect Storm was made famous, in style, by George Clooney and Mark Wahlberg. If you’re not already familiar with the story, the novel chronicles the fateful journey of the Andrea Gail and its six crew members. The book is largely speculative, as the true events that took place on the vessel’s return voyage during October of 1991, facing one of the worst storms of the century, can never be confirmed. That having been said, the resulting work by Mr. Junger is mesmerizing, riveting, thought-provoking and heart-wrenching… Feel free to add your own adjectives here! It’s an intense thriller, and not a bad film either! 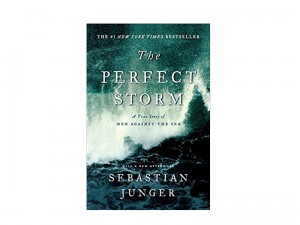